My first foray was as part of the doctoral research of Anne Daye. Dr Daye studied the Masque of Oberon, first and fro the only time performed in 1611 to celebrate Prince Henry the eldest son of King James I and Anne of Denmark.

At the Dolmetsch Dance Summer School in 2009, Anne recreated parts of the Anti-Masque of Oberon and I had the delight of dancing both a Cupid and a Baboon!

A full scale performance of Oberon has yet to be realised……..

In 2012, Historic Royal Palaces approached me to choreograph a reconstruction of the 1632 Masque Tempe Restor’d. Placed firmly in the reign of James’ son, Charles I (James’ eldest son and heir to the throne, Henry, who danced Oberon, died only months after the performance leaving Charles next in line).

By this period, Masque performances had fallen in to a general cycle of Kings and Queen s Masques in which the King or the Queen, Henrietta Maria, would dance the leading role. King Charles was not a confident dancer however his Queen was a very strong figure.

Tempe Restor’d was a Queens Masque designed by Inigo Jones. The HRP project want to focus on the design, costume, music and fall out Jones had with Ben Jonson alongside the dance performance. And for the one night the show was created it aim was not to re-created a true and accurate reconstruction of a 17th Century Court Masque, but a modern, interactive show. 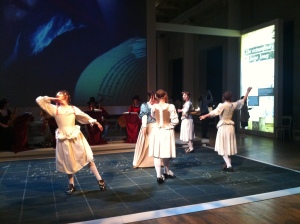 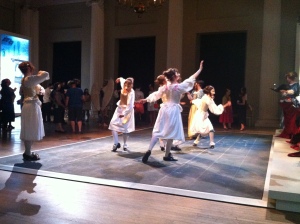 The performance was semi successful but it provided the impetus to a third and, to date biggest Masque project. Loves Welcome – a collaboration between Brunel University and English Heritage.

Again as choreographer, I was engaged to re-create the dance but with a different aim to the HRP project. This used performance as research and was the first phase of a larger project whose purpose was to test the space. 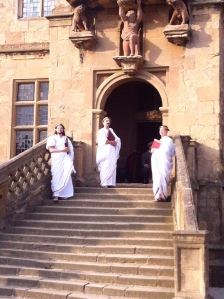 While we were aiming to re-create a piece that was visually ‘historical’, practical issues demanded we had to change and add aspects.

We needed to double the cast as we had a limited number of performers and the piece had to be doubled in length in order to produced a viable length for a ticketed performance. We hinted at ‘history with the costume and instruments but there were many deliberate anachronisms. We do not know exactly what the score was, how many musicians or what instruments were played but we made an educated guess and practical decision based on funding, amplification and research time.

None of the choreography exists. There is no indication other than ‘They dance’. Using a combination of existing choreography and  creating new sequences around it, I developed one idea of what it may have looked like. I also had a classical Indian dancer as part of the cast and chose to include those movements in one of the pieces.

The project was successful in that it did test the space. Acoustically and visually, placing the show in the Venus Garden worked better than we could have imagined. We are pretty sure this is where the original performance took place.

As an artistic piece, there is always more work that can be done but beginning to develop choreographies from what we have was very exciting and gave some very entertaining results.

To make it the grand spectacle it originally was needs two things however – the proper funding but perhaps more importantly, the audience need to be able to understand just how spectacular it was.